Andrew Scheps is a highly respected music mixer, producer, and engineer who has worked with some of the biggest artists in the world, including Metallica, Adele, Red Hot Chili Peppers, Beyoncé, Green Day, Jay-Z, U2, and Michael Jackson. But despite his years in the business and numerous achievements—he's won three Grammy Awards, including "Album of the Year" for Adele's 21—he is surprisingly humble, always looking to expand his craft and get better.

"I still suck—I have no idea what I'm doing," he insists. "There are so many people I think are way better at it than me, so you're always pushing, trying to suck less."

This coming from a man who was at the forefront of digital recording. After getting a degree in audio recording from the University of Miami, he landed a job with New England Digital, manufacturer of the Synclavier digital synthesizer, right out of school—"which was super geeky," he fondly recalls—before dabbling with Sound Tools (the precursor to Pro Tools), then ultimately Pro Tools, which he's used throughout his career since.

"I was always a geek and loved technology," Scheps admits. "When I found out that this existed as a thing—making records and being in studios—that was it. My head exploded and that's all I wanted to do."

Over the years, he's honed and evolved his craft through a who's who of artists and many evolutions of Pro Tools—from Pro Tools III NuBus in the mid-'90s to Pro Tools | HDX and Pro Tools | HD Native today. But as his mixes grew bigger and more complex, taking up all the DSP in his HDX system, he switched to using HD Native to mix projects, with HDX ready to handle tracking tasks. This dual rig setup served him well for years, but things changed when he began beta testing the new Hybrid Engine for HDX in Pro Tools | Ultimate.

Instead of having the audio mixer rely on his HDX system's DSP, the Hybrid Engine enables Scheps to mix projects fully in Native mode, with the ability to switch any track at any time to DSP mode for recording at the touch of a button. He immediately saw the benefits.

"The Hybrid Engine is the most game-changing thing to happen in Pro Tools in a long time," he says. "For years, I couldn't use my HDX cards for mixing. I had to use them for tracking for the low latency, but it absolutely did not work for me for mixing. And now I couldn't possibly mix on any other platform than the HDX cards with the Hybrid Engine. It's the most efficient Pro Tools system that exists. Period."

That's because 80–90% of the plugins Scheps uses for mixing music are AAX Native plugins, which, without the Hybrid Engine, can quickly use up a lot of voices when mixing large sessions with HDX.

"I had my HDX rig for recording and then I switched to an HD Native card for mixing, because once sessions get big, the mixer takes up the entire HDX card, at which point you've got no DSP left and your roundtripping gets problematic," he explains about a technical issue where inserting a native plugin after a DSP plugin causes roundtripping between HDX and the host computer, eating into available voices. "The Hybrid Engine fixed that completely from the first day that I could test it."

I couldn't possibly mix on any other platform than the HDX cards with the Hybrid Engine. It's the most efficient Pro Tools system that exists. Period.

It's also put a lot less stress on his workflow whenever he needs to record, now that he no longer has to move between two systems.

"If I want to do an overdub, I just hit the DSP [Mode] button and I do an overdub," he says. "I don't have to think twice before recording—as opposed to not really wanting to do it because it's going to be a pain in the ass, and I've got to change things, and I'm not going to hear exactly what I'm recording. Now, I absolutely am hearing exactly what I'm recording and it's great… The fact that you can pop a track into DSP mode and get low-latency monitoring while you're working—to me, that's like the icing on the cake."

Scheps is also seeing a huge performance boost from his system overall. "Just mixing stereo—the load on the system [with the Hybrid Engine] is actually less than when using the HD Native card," he acknowledges. "I'm able to mix just in stereo much faster, with fewer playback errors and DSP errors. It feels like I got a new computer—it really does. Up until the Hybrid Engine, I was seriously considering a Mac Pro, and now my iMac Pro is absolutely fine for everything I'm doing. I'm running a gigantic session right now and I don't see it going over 20% CPU usage."

If you're lucky enough to attend, Scheps periodically conducts seminars where he shares his mixing approach and methods.

Exploring the possibilities of Dolby Atmos

Now that the Hybrid Engine has enabled him to switch back to mixing full time on HDX, Scheps is realizing the creative opportunities it brings, including the ability to mix music in Dolby Atmos®—something he wasn't able to do with his HD Native system.

"[I'm] getting all my I/O back while I'm mixing, which is really important moving into Atmos music," he says. "It's kind of crazy how much of an upgrade this is to things I already own… I just hung those speakers today in the back for Atmos [he says, gesturing behind him], and I need 128 I/O. I can't do that with an HD Native card—it's impossible. [Being able] to get 128 I/O to the [Dolby Atmos] renderer and at the same time be able to run a native mixer is what allows me to even think about mixing in Atmos. It would be absolutely impossible without the Hybrid Engine."

The Hybrid Engine is the most game-changing thing to happen in Pro Tools in a long time.

A few weeks later, we checked in to see how Scheps's venture into mixing Dolby Atmos music was going (his studio is now officially Dolby-certified) and find out what's been the biggest change to how he normally approaches his mixes. 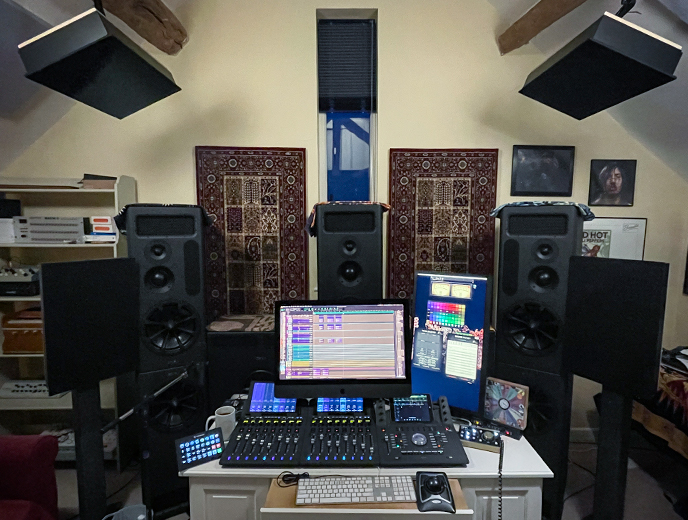 "It's a really different way of mixing from every angle," he says. "The most practical thing is that there is no mix buss. In stereo music mixing, the mix buss is a given and is a big part of how you work. In Atmos you have to think differently. I've managed to come up with some creative ways to do my mix buss-style processing, as well as the parallel processing I rely on, but it's a very different beast.

"The other thing is that Atmos for theatrical is very much a speaker-based playback medium for consumers, whereas Atmos music is almost more about the binaural playback than speakers, so you have to be very aware of how it translates to headphones."

And he reiterates how important the Hybrid Engine has been in making his foray into the immersive format possible. "I absolutely couldn't mix on the classic HDX engine," he says. "The Hybrid Engine gives me all the I/O I need—and voices—while still using a native mixer, which lets me mix."

*Dolby Atmos is a registered trademark of Dolby Laboratories.

© 2021 Avid Technology, Inc. All rights reserved. Avid, the Avid logo, Avid Everywhere, iNEWS, Interplay, ISIS, AirSpeed, MediaCentral, Media Composer, Avid NEXIS, Pro Tools, and Sibelius are trademarks or registered trademarks of Avid Technology, Inc. or its subsidiaries in the United States and/or other countries. The Interplay name is used with the permission of the Interplay Entertainment Corp. which bears no responsibility for Avid products. All other trademarks are the property of their respective owners. Product features, specifications, system requirements and availability are subject to change without notice.